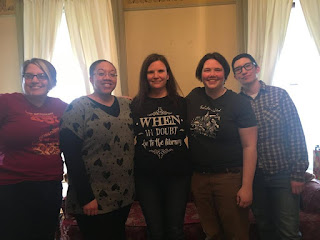 Workers at the William P. Faust Public Library of Westland went public to their employer on March 1 to announce they were joining a union. Within two days, five full-time librarians were fired. A few days later, the head of the library’s reference department gave her resignation as a gesture of solidarity with the staff. The library board has continued to stand by the library director’s decision to fire these workers since that time.


On March 29, the fired workers held a protest near the library, and 15 local wobblies showed up to offer our support. Members of the Detroit and Ypsilanti IWW branches sat in  peacefully on the public discussion — and witnessed the library board again give their full support to the firings, which they rationalized by claiming it would save taxpayer’s money.  In a city built on the backs of union families, their decision to bust a union is absolutely disgusting. The fired librarians and their supporters are planning another protest at the library (6123 Central City Pkwy, Westland) on May 10 from 6:15 to 8 p.m. To keep tabs on their latest activities, visit http://bit.ly/2nlzPIO or search for “Westland Librarians” on Facebook.