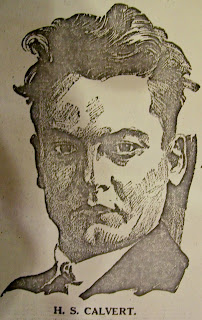 Herb S. Calvert was a laborer and socialist from California. He moved to Detroit in 1918 to agitate and recruit for the IWW.

In late 1920, Calvert proposed that his fellow auto workers take over the Ford plant during an extended shut-down in order to make their own cars, promising that the workers would "pay for all raw material used and... in general return the plant in even better condition." 25,000 workers, mostly unable to afford a car, turned up with their lunch pails on the appointed day.

Management, of course, treated the proposal with scorn. No cars were made, but Calvert's scheme showed in practice that the plant workers had the numbers and capability to seize the plant if they chose. -FW Paula, X383986

Here is the text of the flyer Calvert circulated:

From the Ford Men to the Ford Motor Company. In View of the Following Facts:

That the Ford Plant is to be closed until Feb. or later

And that only a very few of the Ford employees own an Automobile; And of Henry Ford’s often repeated desire to help the other fellow;

WE The regular Ford employees request the use of the Ford Plant under the existing Ford Organization during the month of Jan. to make the automobiles for ourselves and families; The total cars produced to be distributed on the basis of a minimum of one car to each employee the remaining cars at the same proportionate ration as the December pay.

WE The employees, agree to pay for all raw material used and to maintain all existing departments and in general return the plant in even better condition:

All Ford Employees desiring to resume under these conditions show up Monday with their lunch ready for work.