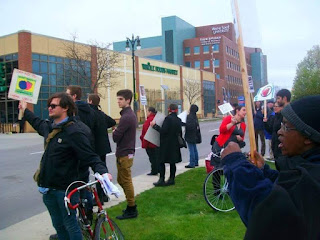 Local wobblies and other supporters of Washington berry pickers spent a lot of Sundays in 2015-16 standing in front of Detroit’s Whole Foods informing customers about an ongoing boycott of Driscoll's Berries. We’re happy to say that this work, combined with the efforts of the pickers themselves and similar solidarity actions across the U.S., helped Familias Unidas por la Justicia (FUJ), which represents berry workers at Sakuma Bros. Farms in Skagit and Whatcom County, Washington, get union recognition last September.

FUJ is currently in contract negotiations with Sakuma Bros and is no longer asking for a boycott. Supporters are encouraged to call Sakuma Bros.at  (360) 757-6611 and voice their support for a decent union contract. That said, it's important to keep leaving those Driscoll's Berries on the shelves, as indigenous Mexican berry pickers at BerryMex farms in Baja California (which is also connected to Driscoll's brand) have asked for the boycott to continue.